Order a Talk To Me Volume 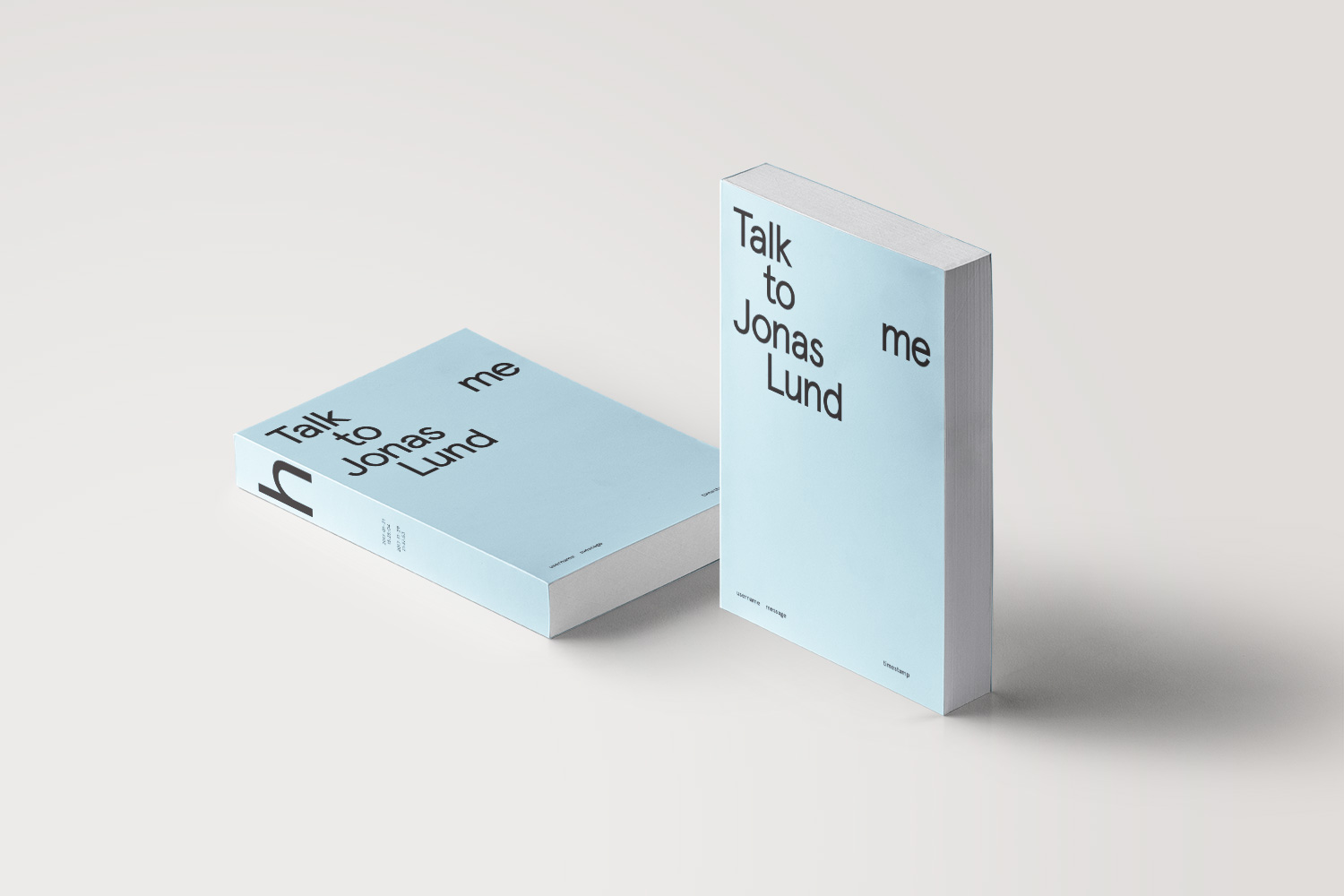 Talk to Me by Jonas Lund
Text by Domenico Quaranta

On October 21, 2017, at 6:17 PM, Jonas reached out to me with a proposal: to turn his online piece, Talk to Me, launched a few months before, into a book. According to the official text, “Talk to Me is a conversational chatbot, […] trained and modelled on all previous instant message conversations (Skype, WhatsApp, Facebook Messenger) as typed by the artist himself to create a smart, machine-learned, automatically talking version of the artist.” But in reality, Jonas told me, “it’s just me typing the answers through a Telegram bot, so each time someone uses the website I get a message on my phone and I answer.”

I liked the proposal. I’d had a couple of short conversations on the website before this revelation, and I’d never perceived Jonas’s chatting with me as something different from a chatbot. He repeated my sentences, he answered with questions, he looked pretty dumb, just like a bot. This switch, from a bot emulating a human to a human emulating a bot (pretending to be him), opened up a whole new range of questions and issues and changed the piece from a software intervention on the artificial intelligence hype into a daily, exhausting performance.

Anyway, at that time, the possibility of publishing the book faded out, only to return about two years and 1.6 million messages later. Parsing these thousands of pages, you will be confronted with a monumental, three-year, outsourced, unsuccessful effort to perform and re-enact the Turing Test, involving hundreds of participants from all over the world. I say “unsuccessful” because “Jonas” is actually a hybrid intelligence, part human, part software. The “real” Jonas is there, but often the chatbot takes over the chat, as it becomes crystal clear when the software crashes and starts endlessly looping the same series of sentences. But sometimes the “real” Jonas comes back, and as he tries to behave like a bot, you can never really say who’s speaking from behind the screen. The opacity of online communication, together with a masterful application of the liar paradox, protects Jonas from all our efforts to understand who or what is actually talking to us. But, of course, the same opacity protects the visitors as well. How many humans have been chatting with Jonas? And how many bots?

This can be seen very well in Jonas’s chat with a user named “Tarball”. On May 3, 2017, after asking each other to prove they are not robots, Tarball writes: “Too bad Jonas! Nobody can prove anything here! What a mess!” And Jonas: “That’s my point Tarball.” The day after, Tarball comes back as “pup”, saying: “Here is what I think. This app actually involves both a bot and a human. The automaton does all the quick answers and makes sure the answers remain fast. The human adds an (sic!) layer of reflection, selective memory and prediction.” Jonas: “That is not correct Tarball.” pup: “shit”. Jonas: “shit”.

It’s thanks to this endless, flexible play on identity that Talk to Me becomes an apt metaphor of the human-software continuum that we experience online on a daily basis, with all its consequences and biases: the end of truth, the exploitation of AI to fake human communication, and the exploitation of humans to fake automation. 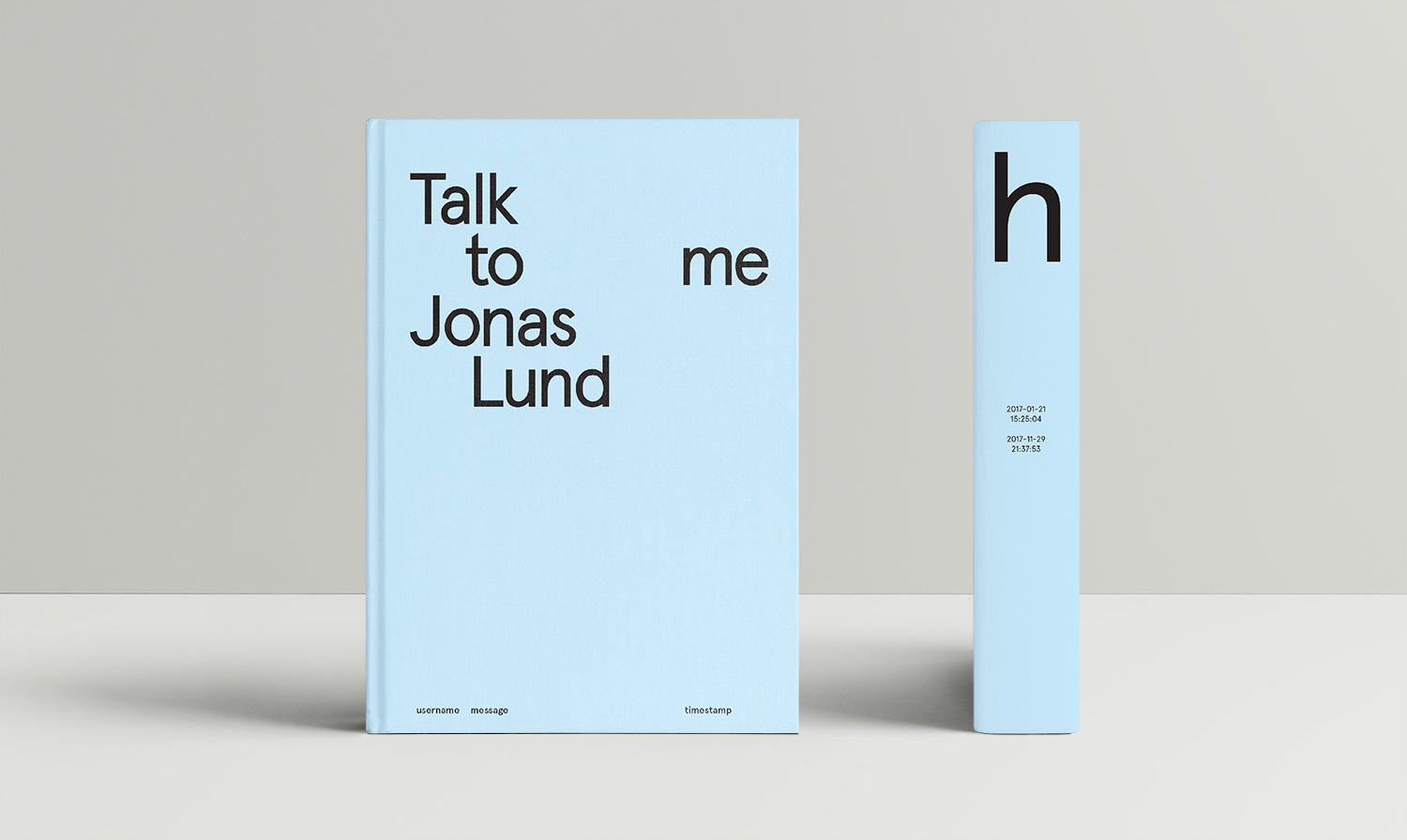 Talk to Me (https://talk-to-me.club/) was introduced at the Virtual Perception exhibition at Huset For Kunst og Design in Holsterbro (Denmark), opening the 9th of February 2017.

Along its two years plus of existence, the web project has been presented live in the following events:

• UNCANNY VALUES: Artificial Intelligence & You, MAK, Vienna (Austria), May 29 - October 6, 2019 (curated by Paul Feigelfeld and Marlies Wirth in the frame of the Vienna Biennale).

This book version has been produced on the occasion of Hyperemployment, an exhibition on post-work, online labour and automation curated by Domenico Quaranta and produced by Aksioma - Institute for Contemporary Art for the International Centre of Graphic Arts, Ljubljana, November 7, 2019 – January 19, 2020.